Home > Blog > #CarHacks: Getting Out of the Snow When You’re Stuck

#CarHacks: Getting Out of the Snow When You’re Stuck 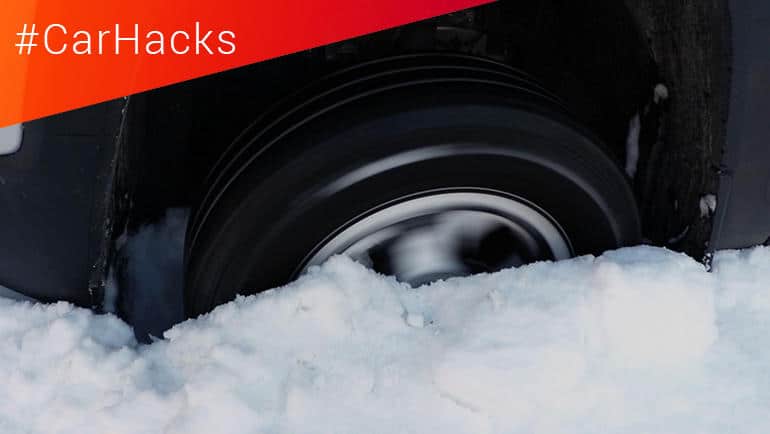 You get in your car and suddenly you realize you’re stuck. The snow is up to the tires and they’re just spinning away. What do you do? This next #CarHack shows how safely get your car out of the snow.

Shovel out
The first step is to dig out your car and try to make it so you can see all the tires. Remove as much snow as you possibly can.

Get gritty with it
Put something down around your tires like salt, kitty litter or sand. This will help you get traction when you try to back up or move forward.

Make sure your tires are pointed straight
It’s easier for your car to move straight out of whatever you’re stuck in. That said, you may need to move your tires around a bit until they are able to get traction and once they do, straighten them out again.

Gotta rock it don’t stop it
Next, you want to do something called rocking it. This is where you roll the vehicle forward, put it in reverse, roll it backward, and then shift to drive and roll forward. This uses your car’s momentum to get you out of the snow you’re stuck in. Once the car is unstuck and rolling in one direction, keep going until you’re out of the snow.”

Let a little air out
Another thing you can try is to let a bit of air out of the tires. This creates more surface area on your tire which can help give you more grip to get out. Just don’t forget to reinflate your tires later! Until you get the tires reinflated, keep the speed down so you don’t ruin your tires.